Isabella Stewart Gardener, co-founder of the Isabella Stewart Gardener Museum in Fenway, claimed in her will that all that was in the museum and built from the beginning should remain from that time onwards. Although she assigned trustees to take over and also make decisions that would ensure the continuation of the franchise, the intended purpose of the Museum was still to be held (Isabella Stewart Gardener Will and Codicil). Therefore, in argument as to whether the demolition or any changes made to the Museum against the original structure or architecture was appropriate is wrong from my point of view.

Although the carriage house acted as a storage facility and a visiting artist department, historical value still exists. In the debate on whether it should be demolished or not, it is controversial on whether it is in accordance with the will or not. In Gardener’s will, she says that the trustees left with its ownership should do what seems best to uphold the Museum, while on the other hand Gardener also mentioned that the original structure of the Museum should not be changed in any way that it should remain as to partake its original meaning. From my point of view, it is relevant that there should not be any alteration in any way (Isabella Stewart Gardener Will and Codicil). Also, Trevor Fairbrother, a freelance curator and former staffer, made it clear in a letter: “make it certain that the carriage house, walls and trellises were the major elements in the founder’s vision of Fenway Court as an architectural and horticultural statement”.

If the carriage is to be destroyed, it is said that a café, offices, and a restaurant are to be made out of that. The feeling that the visitors require to have while entering the museum would be totally different. The ‘link’ was to bring the greenhouse effect. There is also to be a construction of a musical performance theatre in the tapestry room. This is to be the main highlight of the new transformation. In my opinion, this is a good renovation measure as it has not only brought energy to the museum, but also acts as a source of entertainment rather than just observation.

In an era of industrial civilization, moral and cultural changes, room for such an exquisite structure will look odd to some people, but to others, it may also seem to be a source of history for those who look for inspiration from the old times. Gardener’s museum invites us to turn our backs from modernization to originality and authenticity since she knew that her work would be a piece of history. Those who have been left in charge of the Museum this time have been thought-driven that there is need of an expansion that will make it fit based on the inspiration from the Workshop of Genoa. Although the expansion of the museum is inevitable to make it more advanced in nature, there should be the need to maintain an authentic look to visitors who have paid a fee to see Gardener’s work. This, at least, will be well distinguished, but still maintaining originality.

Staff members went forward to plead, not to distract the carriage. To do so, they had to come into arguments with many parties so as to win the conflict. The demolition party was in need of a new space in order to advance their mental picture of what was to become of the new look of the Museum. On the other hand, the non-demolition party was on the verge of social conflict since they wanted the original picture of the Isabella Stewart Gardener Museum. The destruction of the carriage is said not to be in the will, and that it is against it since it was such a big issue to them.

Opposite to the will of the Isabella, this seemed to be a legal action as well as an illegal action. Other famous writers also claimed to release journals in favor of the non-demolition party. This action could damage the career of the relevant writers, but journals were spread to the public. Up to date, there is still need for the right opinion from all the relevant parties on what Isabella would have preferred for her Museum.

Setting the basis of the renovation from our times brings a whole new meaning to the Museum. Since this will be just another work of art like any other nowadays. The values and sacred meaning intended by Gardener will thus be withheld. The surprise that visitors would have expected would not be there. What good will glass ceilings and walls do to a Museum? The visitors should take a trip down memory lane where originality was definitely from within so that it can give people something to talk about thereafter.

In view to Gardener’s persona about the garden, there is need to build, develop enhance, and explore her work. At least from this, trustees and staff members need to make the museum joyful and jubilant for new and old visitors from time to time but in relation to all these, visitors should not come in and view modernism and civilization, instead when walking in, they should commemorate gardeners work. Therefore, Gardener’s work should not be altered in a modern way if it is to be changed.

The works of art at Isabella Stewart Gardener Museum are well-distinguished from other ones that are in relation to the conventional museums like the Museum of fine arts. The difference is viewed in terms of artists, mediums, partners, and also objects. The work of art that was displayed at the Gardener’s museum has existed for very many years, and inspirations have been drawn from there on from either visitors or as references from various sources. Some of the works of art from Gardener’s museum are shown below. 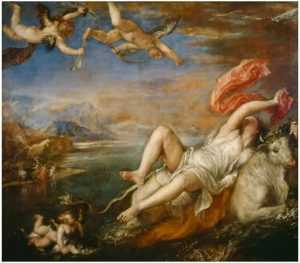 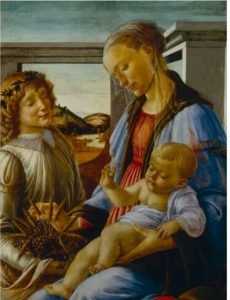 From this, we are meant to believe that her work was genuine and authentic from the very beginning. The museum house is, in my opinion, one of the most appreciated and distinct art gallery in the United States of America. Below is a composition of art from the Museum of Fine Arts.

Immediately, one is able to see a total difference between the two categories of art. Gardener’s work is more detailed and seems to have a deeper meaning to her, while from the Museum of Fine Art collection it seems to light to discuss. Therefore, in my opinion, there is no need to compare the two works of art. I believe that we see what is meant to be archived for a whole lot of generations as too many inspirations are drawn from it.